AMPTHILL came close to a notable away win only to be denied by a Jersey Reds’ fightback in the final stages of a tense encounter.

Head coach Paul Turner was left frustrated by his team failing to hold onto their lead at the business end of the game.

“We got to 17-5 but then everything fell apart for us in the last ten minutes,” he said. “Our lineout went, our decision-making went, we overplayed when we’d been given a penalty and suddenly it was 17-all.

“You’d have thought getting two points in Jersey would be a good result, but I felt we left another two out there and that’s why I’m disappointed.”

The Reds started strongly and three consecutive penalties enabled them to establish the platform in Ampthill’s 22 which ended with Guy Thompson scoring from a rolling maul.

The first half was an even affair and the visitors should have got points on the board, but Russell Bennett missed a brace of penalty attempts and some attacking thrusts were denied by determined Reds’ defence.

Ampthill finally broke through in the final play of the half, with Tom Hudson punching a hole in midfield, Morgan Monks following through powerfully and Austin Wallis following up to score by the posts. Bennett added a straightforward conversion to put his side in front.

A penalty awarded within 20 seconds of the resumption gave Bennett a chance to add three more points. He slotted the kick but was denied a few minutes later when his effort rebounded off the upright.

When quick hands from skipper Charlie Beckett and Monks put Joe Goodchild over in the corner, and Bennett slotted a superb conversion, the game looked over.

But Jersey’s replacements had a positive impact, and TJ Harris burst from the back of a maul to score, although Sam Leeming missed a relatively straightforward conversion.

Thompson’s second try with five minutes to play, converted by Leeming, put the Reds back on terms but neither side was able to engineer a winning score at the death.

Director of Rugby Harvey Biljon admitted there were questions his Jersey side had to answer about their display.

“I want to know why we couldn’t play the sort of rugby we played in the last 15 minutes for the whole game,” he said. “Give Ampthill credit, they came with a game-plan of not allowing us to build any tempo and we failed to adapt to that.” 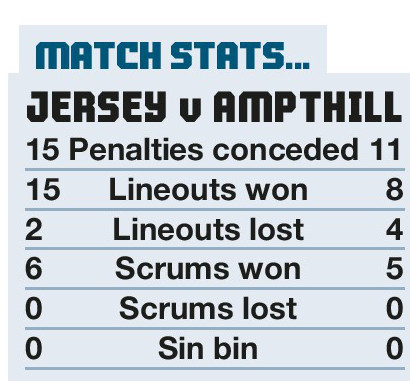