A cold blustery Wednesday evening saw the Ampthill RUFC U14’s team travel to Towcester for the much-anticipated semi-final of the East Midlands Cup.

In front of a good supporting crowd from both sides, Towcester were first to get off the mark breaking through a strong Ampthill defence midway through the first half, they then sent the conversion wide to carry a 5-0 lead.

Ampthill kept their heads up with Max Mariani breaking through just outside of Ampthill’s 22 to ground the ball between the posts. This was then converted by Rafe Witheat to put Ampthill 7-5 in front. Fighting against a considerable slope Ampthill were solid in their defence and held their nerve throughout the first half putting the Towcester backline under constant pressure with some huge tackles! A penalty kick from Towcester just before half time left A’s trailing by 1 point but with the advantage of the slope in the second half.

The game restarted with Ampthill chasing their own kick down that was then fumbled by the Towcester fullback, Rafe Witheat seized this opportunity with a fly hack before chasing and grounding for Ampthill’s second try of the night.  Unfortunately, Rafe’s attempt at converting his own try came up inches short however this still gave Ampthill a 12-5 lead.

This quick try after half time seemed to change the dynamic of the game and Ampthill went on to dominate both in attack and defence with Towcester unable to find any way through. A great pick up from the back of a ruck saw Rafe get his brace, this one successfully converted giving Ampthill a 19-8 lead.

We then had 5 minutes of Towester attack with several phases however they were unable to find any gap in Ampthill’s defence and were pushed further back towards their own 22.  James Litchfield who made his starting debut as number 8 then picked the ball from the back of a scrum to power over the line.

Overall it was a fantastic performance from all the boys in the squad who constantly pressured the opposition in defence and put some excellent phases of rugby together in attack !!    The final score Ampthill 24 Towcester 8.

The U14’s East Midlands Cup Final will be an all Bedfordshire affair with Ampthill facing Luton at Bedford Athletic RFC on Sunday 15th March (Kick Off 11:30am). 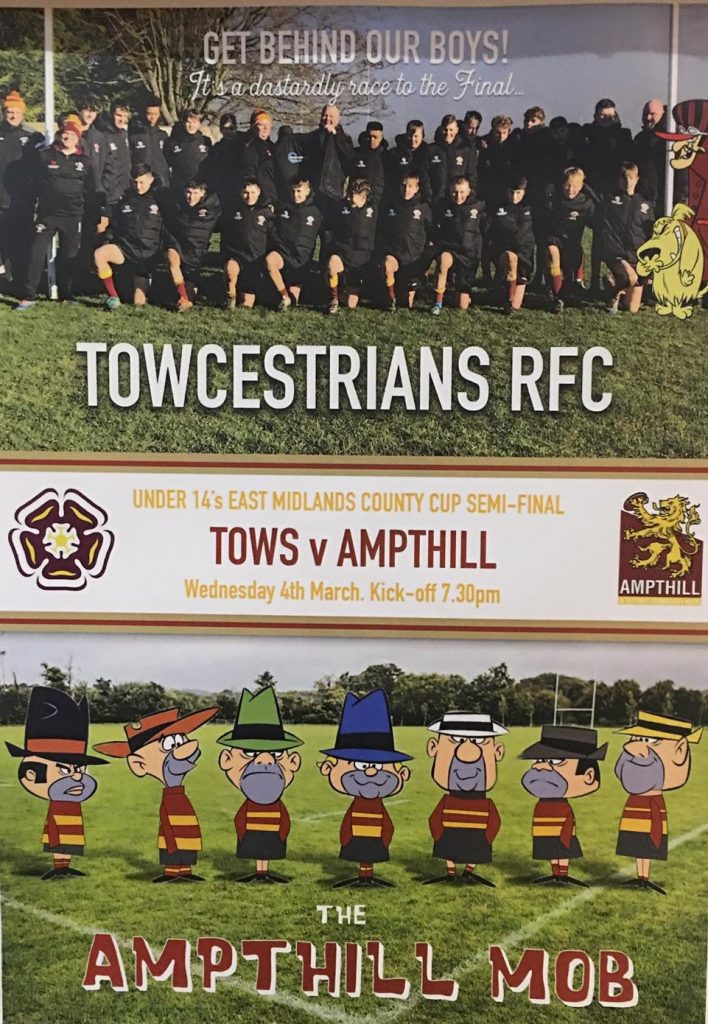